Via: Dr. Toon on AWN

Martin Goodman has an interesting post over on AWN entitled “Society and its Discontents”. In it, he discusses the fact the animation is merely a product of the culture from whence it came and as a result, interacts with it on many differing levels. Below is an excerpt from the post:

Once produced and seen, it [animation] takes its place in the enormous mosaic of our media and is consigned a definitive niche by the consensus of both the public and we, the critics.

For example, animation undergoes a process of “branding” in which it becomes a definable commodity. A simple example: there is today a subset of animation called “Classic Looney Tunes”. I have no idea what this really means, since many of the most beloved Warner shorts were actually “Merrie Melodies”, and shorts bearing this title continued to be produced by the studio until its final days. “Looney Tunes” today means both the characters that originated at the Warner studio and the cartoons both past and present, featuring them. Another example is Nickelodeon: It is both a network and a brand, with economic endeavors separate from its televised fare.

Thus, we have a confluence of culture, economics, politics, and demographics to consider whenever we analyze a particular piece of animation. The way in which these factors interact is an important consideration for you future critics (Of course, you can forego all of this and simply watch cartoon films and shorts for the enjoyment of it, and that’s fine. Consider this a “think piece”)

I agree with pretty much everything Martin has to say. Animation is indeed a product of the culture that created it. Pretty much any cartoon ever made is an example of that! It’s also forms part of out very complex and intricate cultural landscape, that is almost a given at this stage.

Where the post gets interesting is when it starts discussing the various allegations made against Spongebob Squarepants. Mark promises to go deeper into some of the controversies in his next post, but there’s an important aspect to the whole scenario that I think is a simpler explenation for everything:

Spongebob is a winner.

Yes, Spongebob Squarepants the loveable man-child of a sponge is a winner. He’s been on the air for a decade and continues to rake in the cash for Nickelodeon.

SB (as we’ll call him for the duration of this column) rivals The Simpsons in popularity and longevity, and like them, has a generational crossover audience that seems to span every demographic.

“So what?” I hear you say. “Fair play to him” is what Irish people would say. However, plenty of people look at that success and are either reviled or jealous because of it. Such feelings can inherently obfuscate (fancy word for obscure/contort) otherwise rational views towards a show.

In a way, it’s very similar to the various patent battles surrounding smart phones. Android is racing past Windows and Apple in terms of market share and features so both parties are going after it with the patent guns blazing. It’s not because Android necessarily infringed, it’s because it’s easy to go after the clear leader.

Just think of the guy who tried to sue (how he’s eligible for a Wikipedia page, I do not know) because he though Stephen Hillenburg stole his idea for a talking sponge. The evidence to the contrary is on my bookshelf in the Nicktoons book, where there’s a comic Hillenburg created in 1989 featuring a character called “Bob the Sponge”. Any lawyer worth their salt could have seen that your man didn’t have a leg to stand on, but he decided to sue anyway, and lost, big time.

He’s been the most popular cartoon for kids for the last decade. He’s wildly popular in all respects so just that simple fact will make him a target. You can bet that if our favourite yellow sponge had stuttered to three or seasons we wouldn’t have heard any of the controversies, past, present or future.

Having lived in the States for just about 4 years now, I can safely say that although there is very real cultural and societal recognition for those who get ahead or are successful, there is also a sector that sees that success and attempts to undermine it or take it for themselves by using the legal system for their own ends. Back home people would just begrudge you, that’s just the Irish way,

All this goes back to my series of posts on why animators need to be aware of the legal implications of their work. It’s a minefield out there and you have to have your wits about you if you are going to successfully navigate it. No, this post isn’t about one particular character, but it is about a specific type of character (which I can justify because November in Irish is “Samhain” which began as a pagan festival to honour the dead). While I was nosing around the internet looking for pictures of Mandy for the post from a few weeks ago, I stumbled across the Goth Girls of Cartoons blog and found it quite amusing. It’s not a regularly updated blog but a static one instead. On it, there are various list posts on different kinds of goth characters. Such as the ones who only appeared in one episode, ones who where main characters in their respective shows, characters who weren’t normally goth but became ones for a short time and heroines who just happened to be a bit on the dark side. Overall its quite an interesting collection of characters who share certain traits. I don’t particularly get goth culture, but I have found that such characters in cartoons tend to be a bit more interesting than others because they are generally bestowed with a strong sense of who they are and what they stand for and believe in. For better or for worse, it at least makes them stand out from the crowd.

Each character featured on the blog comes with a fairly good description with just a tiny bit of personal subjectivity, but that doesn’t distract from the overall usefulness of the information.

So go ahead and have a peek, you might be as surprised as I was! Due to my abysmal levels of energy this morning, Amid Amidi beat me to it, but Mark’s post is nonethless right on the money.

It’s a 2005 Tom and Jerry, co-directed by Joe Barbera. In some ways, it does a remarkably good job of duplicating the look and feel of the Hanna-Barbera Tom and Jerry cartoons of the 1940s and ’50s. However, in other ways, it doesn’t…..

Mark does an excellent job of running down the issues with the short, starting with the opening credits that would give any designer nightmares and going on to talk about the animation styles. There are some great comments so don’t forget to read those too.

So just what is the point of so attempting to recreate the old timey feel of a Tom & Jerry cartoon? Oh sure, it wears its loyalty to the source material on its sleeve but what does that prove? That it’s the ‘rightful successor/continuation’ to the originals? That it somehow legitimises the cartoon as a real “Tom & Jerry” short? Or is it that the creators are acknowledging the value to be had in the old shorts?

The answer is more likely that it doesn’t feel “right” to see Tom & Jerry in any other setting than the ones we’re used to. The problem is that the original shorts were a product of their time, the 1940s and 50s. Everything was different then, and Bill Hanna and Joe Barbera played on that. Just think of how many jokes they got out of that ironing board. Regardless of how many times the rehashed the same joke, they were at least using contemporary society for inspiration. Who has an ironing board like that now? No-one! As Mark says (emphasis mine):

Creative works are not only the product of people, they’re also the products of a time and place. As the world keeps changing, it is impossible to recreate something from the past. While artists often wish to duplicate what they love, they can only approximate it. Paradoxically, the closer they get to it, the more they’ve succeeded in doing nothing more than an good imitation. And since the originals are everywhere to begin with, is an imitation necessary?

And rightfully so. That’s partially why The Simpsons of today is so radically different from the early years. The show has changed but society changed even more. The first few series’ simply reflect the culture of the time (the early 90s); today’s episodes are much more post-September 11th/global recession in tone.

So the real question is, why are studios/producers reluctant to move older cartoon properties beyond their established norms? Are they afraid of the risk? I mean, Lunatics Unleashed can’t be that scary an example of what can happen, right?

Iif you’re going to go to the effort of updating properties, why not just do something new? It might be a bit more expensive, but risks can be mitigated, and you’re far more likely to have a stronger product that isn’t constrained by the pre-conceived notions of ” the old version”.

At the end of the day though, David OReilly says it best:

A short post today due to time and other constraints but not to worry, I have two excellent links to send you to.

The first is by Ron over at Flooby Nooby where he discusses characters and why they are so important. I couldn’t agree more so you should head over there yourself to read this excellent post.

Secondly, Chris Ledesma has a very informative post over on his blog, Simpsons Music 500, where he discusses the disappearance of melody in today’s theme tunes and why this changing they way that music is used in films. It’s a post that certainly makes you think about the (potentially) serious consequences if things keep going the way they’re going.

Magic, that’s what happens. No, seriously, the lads over at The Comic Cast recently managed to collar him the recent screening of his films at The Big Screen Project in New York and have a chat with him.

Besides hearing to the thick Irish brogues of Liam Geraghty and Craig O Connor, there are some great questions about Dilworth’s career and how he ended up in animation as well as some of his unique sense of humour. There is also some great tips for aspiring animators and some talk about Courage the Cowardly Dog.

Start your day off right! Head on over the The Comic Cast and have a listen! 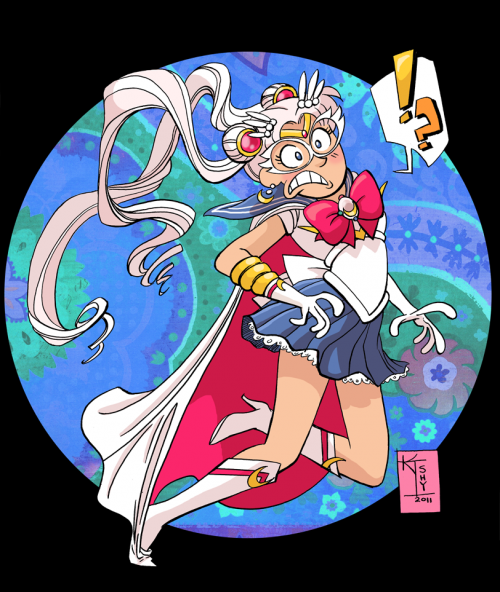 As I’ve mentioned before, I follow a lot of blogs of various kinds, but my favourite ones are undoubtedly the illustration and sktech ones. The reason is simple, they always contain tons of great pictures and the very nature of them means they are updated relatively frequently with fantastic new works. One of my very favourite illustration/sketch blogs belongs to the one and only Kt Shy the erstwhile alias of Canadian artist, Katie Shanahan on the interwebs. Self-described on twitter as a “storyboard artist by day and comic making nut-bar by night!”. She does have over 2,400 followers for a reason you know!

Besides the hilarious Shrub Monkey’s comic that Katie helps draw, she also posts tons of sketches and illustrations that cover a very broad range of the artistic universe, from anime to day to day life. What sets them apart is the almost manic sense of humour that permeates them all (or, well, most of them anyway). Kt updates regularly and her posts are always a joy to read (or see). 🙂

PS. hit up the links page of her blog for a list of plenty of other exceptionally talented folks.