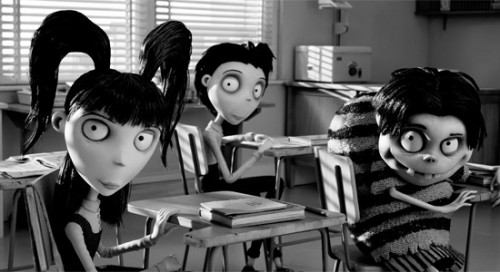 Via: FirstShowing.net
There has been some negativity lately about stop motion animation, specifically this year when so many features have turned out in the medium. Among the criticism an article appeared in the Guardian and I can’t help but voice my opinion on the matter.  I’ll try to keep the opinionated ranting to a minimum and stick to facts, but so much of film (be it stop motion, CG, live action or any combination thereof) ties in to your emotion, your gut reaction, that I cannot possibly leave it out altogether.

First, a bit of background.  Hi, I’m Jessie. I graduated in 2008 with a degree in Computer Animation from Ringling College of Art and Design and have been floating around LA ever since.  I’m currently employed as a technical director (aka 3D / compositing / post production generalist) for television animation.  Though my education was dedicated to CGI, which is currently paying my rent, I’ve always had a soft spot for stop motion.  I suppose it started when James and the Giant Peach blew my mind in 1996.  True, I had seen Nightmare Before Chistmas three years prior, but that I appreciated for its music.  It was James that won me over not only for its stylistic choices but for how it blurred the line between live action and animation, making the models as real as the actors they stood opposite despite their cartoonish representations.  In 2000 “The Periwig-Maker” brought me back to the medium, and for years to come I’d seek out stop motion.  An original Clash of the Titans poster graces my living room while the film itself sits in a row with Coraline and Corpse Bride.  Harryhausen’s Jason and the Argonauts nestles comfortably between The Iron Giant and Jurassic Park.  A Henry Selick signed copy of Nightmare is wedged in tightly somewhere in the back so my dog can’t get to it.  Basically what I’m trying to say is I’m a huge nerd, so bear with me.

Anyway, on to the rebuttals.  Let’s start with finances, since that’s the most tangible:

Computer-reliant Shrek 2 has taken $900m globally, and Toy Story 3$1bn. However, the most successful stop-mo film of all time, Chicken Run, has pulled in only $220m. Coraline, the genre’s darling of recent years, has garnered a mere $120m. The public seem less impressed by stop-mo’s products than the cineastic upper crust. Not that this bothers some of the latter: they’re convinced their preference is aesthetically superior.”

Frankenweenie may take a lot less at the box office than Hotel Transylvania. But it was made for a mere $39m. Hotel Transylvania’s budget was well over twice that. This is pretty much par for the course: stop-mo films tend to cost around half as much as their major CGI counterparts. Their upside may be smaller, but they pose less of a risk.

So take that, stop-mo snobs. Yours is the low-rent option.

Why are we judging films based on how much money they make?  This is something that has always bugged me.  The highest grossing film of all time (ignoring inflation) is Avatar, and I have lots of negative things to say about THAT but that’s an article for another time.  I’m not saying that all stop motion is phenomenal or that all CG is horrible, but if money was what determined quality or worth of a film we’d all be studying Madagascar 3 in our history of animation class instead of Gertie and Achmed (which, for the record, was a form of stop motion!).  Dollars can’t be disregarded though, so let’s stop for a moment and consider that, to my knowledge, stop motion is the only animation format that has not yet been outsourced.  By all means prove me wrong and I’ll happily say I’ve learned something new, but from what I can tell all stop mo produced here in the USA is actually done in the good ol’ US of A.  I try my damndest to stay out of politics but if we’re talking about money let’s talk about jobs.  At my studio my job is to make work done in Korea look pretty; hardly good for the unemployed animators of California and hardly good for my soul but hey, even Disney classics like The Little Mermaid outsourced their bubbles.

The last lines of each of those paragraphs are what I feel discredits the article entirely – if someone can explain how the opinions of the ‘cineastic upper crust’ should be effected by how much money a movie brings in then I’ll go ahead and believe that they’re the cineastic upper crust.  I assure you, us stop motion lovers aren’t the only potential snobs in the business.  If you believe the ‘low-rent option,’ said with such disdain, is really something to be frowned upon, then I question who the real snob is here.

This is straight up misrepresentation.  The closest I can come to finding a reference to elaborate CGI confections in the cinemablend article are the following lines:

SF: […] We have CG set extensions and there used to just be a camera and a matte painting, but now you can actually have the camera moving up, so you can have a big world.

CB: We’re not militant purists about it. You could approach it like, “If we can’t do this practically, we shouldn’t do it” and we never think that. We always think, “We know what imagery we want to capture and then we use the best method to get it.” Our starting point is always going to be practical, it’s always going to be handmade, because that’s the studio we are. But we would never say no to something because you can’t realize it practically. If we need CG to fix this…

SF: You need crowds, so you get CGI characters in there. But the CGI characters were generated from the puppet department, so they were informed by puppet makers.

CB: And when we did visual effects for clouds in the sky, that was informed by the art department. They actually built models of this storm. So it’s totally integrated. It’s all generated from the same visual code.

This all hails CGI as a tool, a valuable tool, rather than a medium for animation.  Utilizing CG as a means to an end is hardly cheating, especially when all CG elements were designed by the puppet crew.  Live action features have been doing it for decades, as well as traditionally animated features, so why not stop motion?  But alright, let’s say it is cheating.  Let’s say you’re a stop motion purist who looks down their nose at any use of post production fixes (or pre production development for that matter, I suppose).  That, in its own way, gives the method of stop motion a completely different and completely unique new appeal.

Not everyone can make a computer generated film on their own.  Software and computers cost thousands of dollars, rendering takes exorbitant amounts of time, and there’s all that pesky technical crap you have to learn.  Anyone – anyone – can do stop motion.  Even if you don’t have a camera you can perform it in the simplest forms of puppetry.  To see a paper doll’s silhouette walk across a backlit screen or to see a perfect clay armature perform flips without the aid of wires, from one end of the spectrum to the other the average person has the materials he or she needs to assemble the most basic of stop motion productions in their own home and connect it in some way to what they’re seeing on the big screen.  And that, my dear readers, is why we need stop motion.  As soon as we relegate animation to only CG we eliminate the potential for the vast majority of the audience to engage and try on their own.  We’re killing the next generation of creatives by saying their lowly medium is useless, that what they have isn’t good enough.  Animation becomes elitist in its own way, regulated to those privileged enough to get the hardware, to learn the software, to troubleshoot thousands of technical glitches one at a time.  Playing with your Barbies and GI Joes is stop motion in its purest form, and yes, CGI can give us broad vistas and perfect bouncy hair and broad splashing oceans, but stop motion can give us a closeness and a relatability that CG could never hope to achieve.

Asking why use stop motion when you can use CG is like asking a painter why he chooses realism when we have cameras.  It’s not just a matter of money, it’s a matter of personality and creative style. I’ll end with a quick commentary on a short film I saw just yesterday called “The Maker,” (http://www.themakerfilm.com/) an uneartly beautiful stop motion piece on the nature of life and creation.  To some degree it is the story of an animator whose work might survive on even after their own time is up.  He assembles the supplies that are close at hand to create what he can, struggling to somehow bring it to life.  But the heartbreakingest part of this short isn’t the content, no I’m afraid what tugged at my heartstrings the most was the awful use of CG particle effects at the end.  Yes, true, throwing a bunch of sand in front of a greenscreen with a fan blowing would not have garnered the same magical rainbow of pixie dust, but damn was it ever incongruous!  Far be it from me to criticize an award winning short but on the subject of CG and stop motion, this is one scenario which would’ve been better off without the “cheat.”  Maybe it’s because I’ve been trained to recognize such things but the use of CG took me out of the story immediately.  Suddenly I was back at my desk, watching a short on my computer, no longer eavesdropping on a cunning, alluringly macabre fabric creature.  He was no longer a character.  He was a prop.

CGI may do a “better” job… but better isn’t always best.

ps.
I will agree with one point wholeheartedly.  STOP ADMIRING FRANKENWEENIE!  Not because it’s stop motion but because it encourages remakes of perfectly good originals, and discredits the value of student or short form work. Have you seen the original short?  It’s great on its own!

Have you ever wondered what would happen if James Bond was made of plasticine, called James Blob instead and got attacked by an otter? Then wonder no more!

OK, did you enjoy that piece of silliness? I sure did! If you enjoyed that one, why not check out the entire series!

Of course that wasn’t done by a professional animator but by kids attending the Donegal Summer School of Music (the very same one I did all those years ago where I played piano and violin) with some help by my old classmate, Jeremy Howard.

It’s a fun little side project that I thought I would share with you because it’s fascinating how animation is almost seeping into aspects of our lives on a daily basis. Now obviously these films were done to showcase the students musical talents as much as anything else, but it’s always nice to see animation used in a complimentary way in artistic endeavors, especially when kids are involved.

Found via Dark Roasted Blend, this stop-motion commercial for natural gas makes clever use of wool.

Found via Reddit, this music video for Australian musician Hudson uses a lot of pencils.

You won’t be one of them after you’ve seen this wonderful short from Italian studio n9ve.

With a tip of the hat to Broadsheet.ie for posting it first.