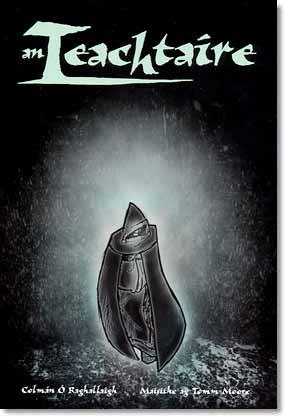 For those of you who aren’t Irish, the title of this comic won’t mean a thing. For those who are and who had Irish passionately taught to them, they know that a tEachtaire means messenger in Irish.

So who would happen to be the messenger in an Irish comic? Why St. Patrick himself of course!

The comic in question is written by Colmán Ó Raghallaigh and illustrated by…….Tomm Moore! It centres around the life of St. Patrick as he is kidnapped from Wales as a young lad and forced to mind sheep on a mountain. After he flees, he has a series of dreams where the Irish call him back to teach them the Gospel. Patrick does so and spends the rest of his life converting the pagans into Christians.

That particular version of the story is a bit boring for a comic, so Ó Raghallaigh has spiced it up a wee bit with a focus on the drama and some marvelous illustrations by Moore. There are plenty of displays of agony, torment, confrontations and Celtic imagery, as can be seen below. It’s not overly long, although as you get into the story, length become rather irrelevant as your mind begins to wander as the illustrations come to life inside your head. Both authors have managed to create a very cohesive comic that simply could not be anything but Irish in origin.

I found my Irish had become rather rusty after a few years away from home although there is an English translation available so you’re not left completely in the dark.

I must say it was a very pleasant surprise to find this under the Christmas tree (kudos to my girlfriend for knowing me better than I know myself) and I found it re-awakened an awareness that Ireland has a rich and varied history that is more than capable of being translated for modern audiences.